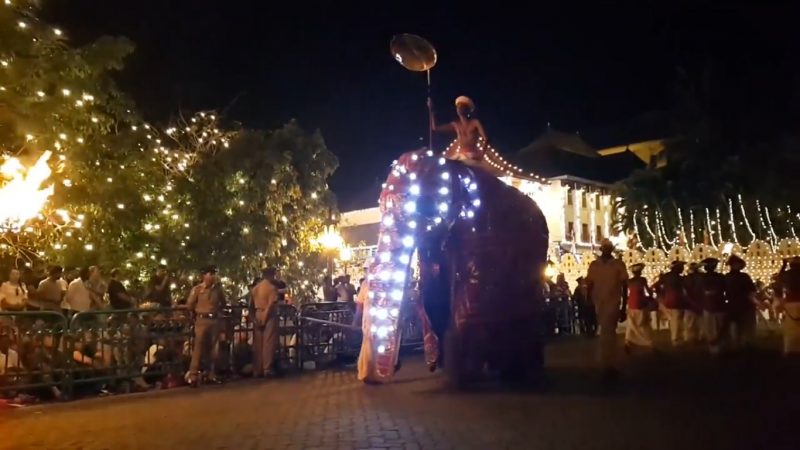 August is one of the best months to travel to the island of Sri Lanka, due to the favourable weather for outdoor activities in August. Usually, the tourist arrival to the island largely reduced with the beginning of south-west monsoon every year (April).

The arrival of foreign tourists hit the rock bottom, especially from European countries, in the month of May due to the unfavourable weather and continues through June and July. A temporary, sharp increase in tourist arrival witnessed again in the month of August and the majority of those tourists do not forget to witness the pageant of the Esala ceremony of Kandy.

The majority of eyeballs gathering to witness this pageant are from Sri Lanka and they are gathering to Kandy from all parts of the country representing all religious groups and ethnic groups.

The historical importance of the Esala ceremony

This historical and religious event is known as the Esala ceremony and its beginning goes back to 2nd century AD. July and August are the main Perahera season of the country, during which Perahera or processions is organized in many parts of the country.

If you choose July and August for the Sri Lanka weather, Sri Lanka rain season, then you have the best chance of witnessing one of these beautiful traditional events. This colourful pageant can be seen in Kandy, Kataragama and Colombo city. The venue for the grandest Perahera or procession of the island is Kandy, the temple of the tooth.

In general, Perahera also celebrates one or several gods such as God Ganesh, God Vishnu, Saman, Goddess Pattini, and God Kataragama. Each of these Gods and goddesses believed to be capable of helping with certain areas of life.

The ceremony is a merit-making activity for participants as well as for spectators. Especially the people and performers who participated in the procession should strictly adhere to certain customs and rituals.

As the beginning of the Perahera draws near, the participants must observe certain customs and rituals and dedicate to the god. The houses are whitewashed, sins are forgiven and people stick to the five precepts of the teaching of Buddha, they refrain from eating fish, and any form of meat.

The chief participant of the Perahera is known as “Diyawadana Nilame”, the caretaker of Temple of the Tooth. He wears the traditional Kandyan court dress in white colour and walks in the parade. He is accompanied by the caretakers of the Sataramaha Devala, rest of the temples that participate in the Procession. The chiefs are the symbol of the vestige of the Kandyan kingdom, the last capital of Sri Lankan kings.

The significance of the Kandy Esala ceremony

The whole event is evolved around the tooth relic of Buddha and a copy of this sacred object is taken around the temple during the Perahera. A magnificently decorated tusker is carrying the distinguish object, which is deposited in a golden casket. All the bystanders pay their respect to the tooth relic by standing from their seats when the tusker passes by.

The Perahera is an event with importance for the Sri Lanka history, customs, rituals and traditions and the event enhances the faith of people on the sacred object. Artistically the Perahera improves the creative talents of Sri Lankan performing artists.

Perahera is a good reason for artists to practice their dance form throughout the year. It is a reason for making new artists on behalf of the older artists, to represent the families that are privileged by the king to participate in the event.

Taking part in the Esala ceremony is believed to be a great honour and a merit-making act for the participants. Hence it is an opportunity not to miss. The Perahera passes all aspects of Sri Lanka life from one generation to another. Hence it is a cultural inheritance for the coming generations that should be preserved by the current generation.

The route of the procession

When does the ceremony start?

Can I buy a seat during the ceremony?

As the procession takes place, the spectators gather on either side of the street and enjoy the traditional music and performances of the dancers. The final Randholee procession lasts around 5 hours and it would be a tedious task to standing all the while. In fact, there is a large concentration of people on the road to take a closer look at the tooth relic. It will be very uncomfortable to stand in the highly crowded pavement of the road.

If you wish to avoid the inconvenience and avoid the crowd the only possibility is to buy a seat. The prices of the seats differ depending on the crowd usually the rates for the seat is at its highest on the last day of the pageant, which attracts the largest number of eyeballs on all 10 days.

Usually, The seats are arranged in building on both sides of the road, on which the dancers and elephants parade and the seats command betters and clear view of the pageant. Therefore buying a seat allows you to have comfort as well the clear view on the Perahera. There is a high demand for seats on the annual Esala ceremony and therefore it is highly advisable to book seats in advance.

Accommodation in Kandy during the Perahera season

The city attracts nearly a million people from Sri Lanka as well as foreign travellers during the Esala ceremony. Therefore the city is extremely crowded. The organizers of the Festival arrange the facilities required by the spectators such as toilet facilities, security, etc. But the travellers who headed to Kandy have to find the accommodation their own.

The Kandy Esala ceremony consists of 5 major parts, as below

The proceedings of the Kandy Perahera (Procession)

The city is isolated largely during the ceremony, for instance, if the ceremony begins at 06.30 pm all the shops and eateries are closed before 0630 p.

Book your accommodation in advance and avoid overprice.

The most roads in the city are closed just before starting the pageant and therefore it is advisable to reach the venue before the closure of the roads.

If you can reach the venue at least 1 hour before the start, you will be able to position yourself in a good place so that you can have a closer look at the pageant.

Book a seat in order to avoid the crowd.

Have some snacks and water bottles with you, the procession lasts around 5 hours.

There is a clear upbeat price of accommodation, food, transport and all other services in the city during the Esala ceremony.  Try to reduce purchases as much as possible in the city to save money.

The program of Kandy Esala ceremony 2018