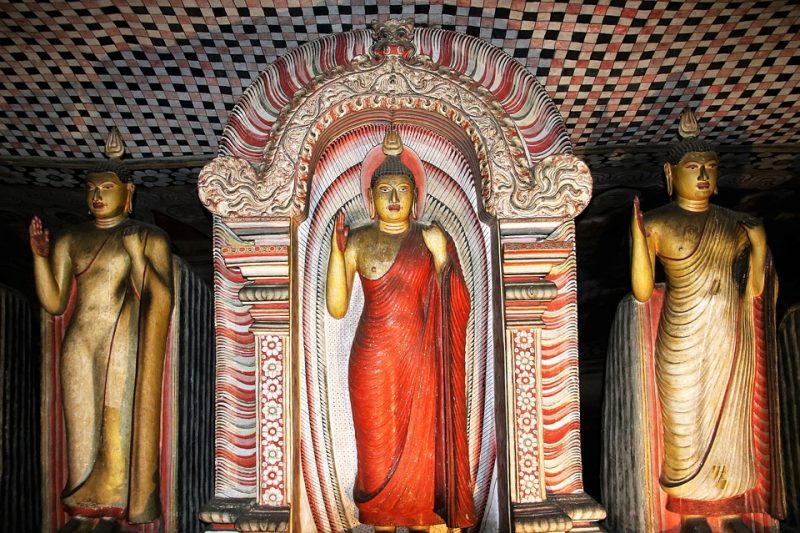 Dambulla golden cave temple or Dambulla rock cave temple was providing shelter to the King Walagambahu in the 1st century BC, during the troubled period, in which the King lost his throne, due to the South Indian invasions. Later, King regained his throne, and the king had developed the caves into an impressive Buddhist temple complex.

Scattered across Sri Lanka, from the northern most city of Jaffna to the southern tip of Sri Lanka, Dondra, thousands of Buddhist Stupas, Image houses, Buddhist temples and monasteries serve as places of worship and reminders of the principles of Buddhism.

From these thousands of Buddhist temples, none of the temple hold the artictis, and historical value of Dambulla golden cave temple, that’s why it is a UNESCO world heritage site. The temple has a unique hide-out on the western flank of Dambulla mountain, which cannot be discovered by a foregner.

Why you should visit Dambulla golden temple?

5 best places to visit in Sri Lanka in one day

12 best places to visit in Sri Lanka in 2 days

15 best places to visit in Sri Lanka in 3 days

Places to visit in Sri Lanka in 4 days

22 places to visit in Sri Lanka in 5 days

WHERE IS DAMBULLA CAVE TEMPLE?

Dambulla cave temple is located near the city of Dambulla, about 1 km southward from the city on the A9 main road.

The temple is fully integrated with the giant rock, therefore that the roofs, walls and the floors practically from the stone. This cave temple is located in the city of Dambulla in the central province of Sri Lanka. It is one of the world heritage sites in the country. Even though it takes a lot of time to reach the temple from the destinations in the west and east coast, where the most tourist resorts are located, it is worth to make a visit to the temple, due to the historical and artistic value of the temple.

This temple is occupying five natural caves on a giant rock near Dambulla city, rocky outcrop of the caves is surrounded by a large number of lakes, mountains, valleys, farmlands and patches of forests. It was an ideal location for a peaceful Buddhist hermitage, indeed it had been Buddhist hermitage in the past.

All visitors to these sacred places suppose to dress in a particular manner to uphold its religious value. There is a set of rules that every visitor of religious site observe while visiting sacred places in Sri Lanka. If you are wondering what these rules are? Check this article “13 RULES TO OBSERVE WHILE VISITING SRI LANKA BUDDHIST TEMPLE, SRI LANKA TEMPLE DRESS CODE AND TEMPLE OF THE TOOTH DRESS CODE“.

The temple was sheltering the King Walagambahu in the 1st century BC, during the troubled period, in which the King lost his throne, due to the South Indian invasions. Later, after regaining his throne, the king had developed the caves into a Buddhist temple complex. It was used as a monastery for many centuries and then neglected due to an undisclosed reason. It fell into oblivion; it was re-discovered by the British colonial rulers in 1800.

Dambulla is a fast developing city in the north-central province of Sri Lanka. Dambulla is an important city located in the cultural triangle of Sri Lanka due to the presence of Dambulla golden temple within its border.

WHAT DO I SEE IN THE DAMBULLA ROCK CAVE TEMPLE?

The image houses built into the rock are decorated with beautiful religious paintings. These paintings show a lot of similarities to the ancient paintings in Ajanta caves. The caves here are arranged like most Buddhist image houses, but they show lot more charm and serenity and the upper part of the rock also keep the hot sun rays away from the caves and moderated the temperature inside. Despite the fact that the temple is located in a surrounding with high humidity, the humidity remains at a very high level within caves during most of the time. It has created some negative impact on the ancient wall paintings and some of them are already partly destroyed.

The unique formation of the rock has created a gap with sizable space in which the image houses were built. Even though the rock is located in the dry zone of Sri Lanka, the oppressive heat is not felt here, due to the constant wind. The opening of the rock is facing the western direction and the wind blows directly into the caves, removing the warm air trapped in the caves.

There is a spacious open passage in front of the caves allowing visitors to move freely at the site. This archaeological site is comprised of five caves. There are about 150 statues here representing Buddha, Gods and a king from the Kandyan era. The view from the caves commands awe-inspiring scenery over the surrounding paddy fields and reservoirs of dry-zone. Therefore the temple does not only allow the visitors to see some of the ancient religious paintings and statues of Sri Lanka but also discover the natural beauty of the dry-zone.

DAMBULLA ROCK CLIMB FROM A9 ROAD

There are 2 main paths to reach the Dambulla cave temple from the base of the mountian. The 1 trekking path starts near the A9 main road, which was the official entrance to the temple and it was widely used in the past. This route is more strenuous than and longer than the 2nd route. The second route starts near Dambulla-Colombo main road, which is the official entrance at present. The access to the Dambulla cave temple through this route is much easier than the other route and quicker too.

The travellers, who wish to see the ancient temple need to climb up a rock, which is about 200 meters from the surrounding area. The temple is located in a rocky outcrop of dry-zone of the country. A giant rock caves house the statues and paintings of the temple of Dambulla. There are several spacious caves about halfway up on the rock. These natural caves were inhabited by Buddhist monks in the early days of Sinhalese civilization. Later the temple was established by King Walagambahu in the 1st century BC.

The path to the temple is paved with cement steps but it can be a bit tough due to the rapid climb.  Despite the effort that demands you to pump more adrenaline than for an average rock climb; this fascinating temple is visited by hundreds of thousands of travellers every year. Travellers can enjoy elegant and artistic religious paintings and statues that originated many centuries ago.

The rock climb on this route is very easy and faster due to the well-built stairs. And the number of stairs to climb is about half compared to the number of stairs found on the other route. The steps are broad and wide even though they may be a bit high. There are about 250 steps on this side of the climb and takes about twenty minutes to reach the end temple. The entrance of the temple is located after the second part of the climbing and one can have a magnificent view over the surrounding vegetation from the main door.

There is a number of rice field and tanks around the Dambulla rock. Dambulla rock is located in the dry zone of Sri Lanka and the area is grown with dry zone evergreen vegetation. Beautiful isolated hills also can be seen from the summit of the Dambulla rock. One can see the Sigiriya rock from the distance if the weather is clear. One reaches the inscription of King Nissankamalla from Polonnaruwa at about halfway up on the climbing after the platform.

Dambulla rock climb ends up in an open flat area on the rock and the entrance to the Dambulla cave temple follows. The giant doors of the temple stay opened during the visiting hours. Just after entering the temple premises, one can see the Bo tree and the caves that are lined-up towards the left-hand side.

STONE INSCRIPTION OF THE CAVE TEMPLE

Being the biggest cave (60m long and 15m in height) in the temple, Maharaja-Lena houses 66 Buddha statues in various sizes. Maharaja-Lena considered being the most beautiful cave in this world heritage site. Buddha statues in the second cave belong to different periods and different rulers. Most of the statues had been adorned with gold during the 12th century AD. Other than the Buddha statues one can find several god-figures in the second cave alone with beautiful paintings that covers a large part of the inner surface of the cave.

The third cave of the temple is known as Maha alut viharaya, which is the youngest cave in the temple. Here one can find a statue of the last king of Sri Lanka, Kirti Sree Rajasinghe.

This is the fourth cave of the temple and houses number of Buddha statues, one miniature dagoba and number of paintings. Most of the paintings are in bad condition due to the high humidity in the cave.

Last cave of the temple houses a large reclining Buddha statue with several other statues that are in meditation and standing postures.

HOW TO GET TO DAMBULLA CAVE TEMPLE

There are several high-end hotels in Dambulla. Most hotels are concentrated around Dambulla lake, which is the most picturesque part of Dambulla where the natural beauty at its best. This area is very rich in trees and plants and away from the hustle-bustle of the busy city. There are several other properties in the area catering to low-budget travellers such as guest houses and rest houses.

The number of accommodation providers in Dambulla is very low compared to other popular places with a historical background such as Sigiriya. Therefore a large number of the tourist base in Sigiriya or Habarana and make a short tour (30 minutes drive from Habaranana to Dambulla) to the Dambulla cave temple.

Dambulla rock cave temple entrance fees are decided by the caretakers of the ancient cave temple. The Cave temple belongs to the nearby Buddhist temple and it is not within the control of the government. The entrance fees of Dambulla cave temple is 1500 Rs (USD 10) per person at the moment and it is valid only for 1 visit.

Dambulla rock cave temple is a historical monument with a rich historical past. The temple is comprised of a large number of statues and murals dating back to many centuries. Having a local guide is the best way to learn about this world heritage site. There are many stories and folklores involved with this important religious site. If you have a guidebook on Sri Lanka it might contain only the basic information on this temple but if you wish to know the information on the detail you can hire a local guide, who are ready to help you.

The temple tour lasts about 1 hour but the duration might vary depending on your interest. The Dambulla cave temple opens daily from 6.00 AM to 6.00 PM. However, the temple is closed for visitors during the pooja ceremony that takes places in the morning at noon and in the evening. usually, the temple is closed about 15 minutes at each occasion.

Seerendipity tour is a fully locally owned travel company with the head office in Colombo. The highly experienced local staff is a key strength of Seerendipity tours and they can plan your dream holiday to Sri Lanka.

When you book a tour with us, you directly book the tour with the local company, it means there are no middlemen and therefore you can guarantee the best price. Simply get in touch with us and let us know when you travel and what you like to see.

Our staff make a personalized program for you, which you can change until you find the best package for you. You can also browse our existing tour packages for inspiration; all our ready-made tour packages are customizable and can be tailored to meet all your expectations. Write us on admin@seerendipitytours.com