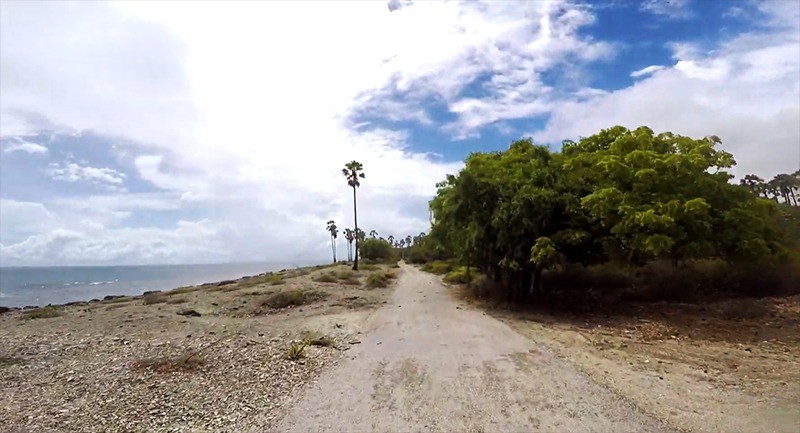 Sri Lanka, on the southern tip of the Asian continent, embodies a wonderful mix of Flora, Fauna and rich historical past, particularly on Delft island, also known as Neduntheevu or Neduntivu, an island, located between southern India and northern Sri Lanka.

Set in the torques water of Indian ocean around one-hour boat ride from Jaffna, which is about 10 km from the island, delft island has been able to retain an unspoiled and traditional feel. However, the island is not a popular destination among the travellers and only a handful of tourists visit delft island every day. Unfortunately, due to the low demand, the facilities for travellers is also not in high standard on the island.

The tourists are barred from the island for 25 years (from 1983 to 2009) due to the security reason, during this period some part of northern Sri Lanka was under the control of rebels. The rebels have attacked the visitor heading to delft island.

Delft Island is the second-largest island located on the sea near Sri Lanka. The island is spreading over 50 square kilometres and it has an oval shape. The island is inhabited by few families and most of them have migrated to the island in the past from Jaffna. The beautiful delft island has a very colourful history, which dates back to the pre-Christian era. According to historical evidence, the inhabitants of the island were believers of Buddhism during the Anuradhapura period (3rd century BC to 11 century AD), and few stupas still can be witnessed in the island. Later the island was occupied by south Indian invaders, Portuguese, Dutch and English colonial rulers.

How to get there

The island can be accessed through the ferry, operated by the road development authority or by air transport. The ferry is the most popular form of transport to reach delft island from Jaffna and the people living on the island are using the ferry. The users are not charged to use the ferry and it can transport up to 100 passengers at a time.

Delft Island is usually not included in most Sri Lanka trips; however, tour operators will add it into your Sri Lanka tour itinerary if you request to do son. It is easy to visit delft island on a trip to Jaffna and it is just a 1-hour ferry ride from the shore of Jaffna.

The natural beauty of delft

The Ocean around delft island is rich in marine life and it is full of tropical fish, dolphins, turtles and you may even encounter a giant blue whale nearby. However, it is not a diving hot spot here like pigeon island marine sanctuary and usually, travellers are not diving here to explore the underwater world. Only 25% of the island is coming under residential lands and rest of the island is under trees, plants and grass.

Delft Island is a great spot for a day out from your hotel in Jaffna. Life on the island moves at a slow pace, and out there the travellers can spend the entire day just eating, drinking and lying on the beach.

The most part of the beach around the island is suitable for a sun and sea bath; some areas are dominated by natural rock formations and no sandy beach while some areas of the island have seagrass growing at the water’s edge which makes swimming difficult. Unlike most other beaches in Sri Lanka, here you do not see travellers lying under the shades of the umbrella, most travellers are coming here to see the natural beauty and hang out very little time on the island.

The population of Delft island

A gradual decrease of residents seen on the island from 1981 and people on the island reduced to 6,200 in 1981. In 19s a large number of people on the island had face many difficulties as the ethnic conflict was at its peak and arm conflict took place around the island. During this period many people fled to southern India in search of a safe place to live. The population further dwindled to 4,124 by 2007. With the ending of civil was some of the residents returned to the island starting from 2009, and the current population is estimated to be 4,800 belong to 1468 families.

A large part of the island is hidden under a carpet of grass and number thorn shrubs sprinkle in the grassland. Bio-diversity of the island does not have much significant and It consists of a total of 146 animal species, a single butterfly species that are endemic.