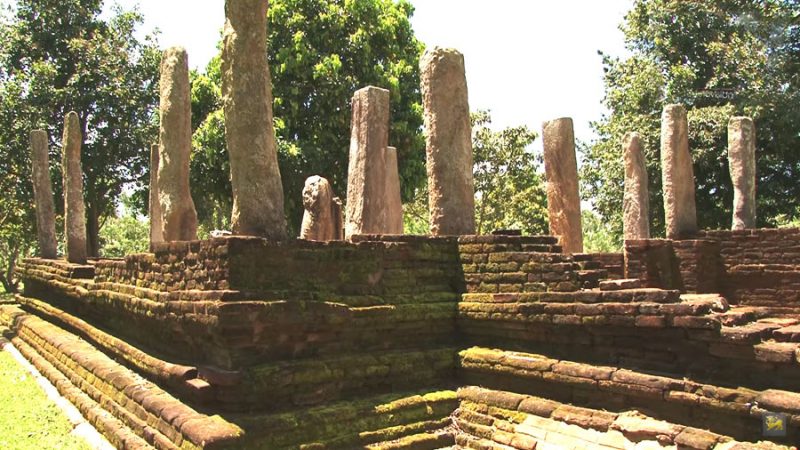 Ramba vihara lies beside the Walawe basing of Hambantota district. This is a treasure of historical significance and shows us the antiquity of Sri Lanka. A large number of murals and statues can be seen at the image house of Ramba Vihara, especially the murals narrate the stories that depict the grandeur of Sri Lanka.

Hambantota is a popular beach holiday destination in Sri Lanka of southern Sri Lanka. A large number of travellers heading to the pristine beaches around Hambantota every year. Hambantota is on the radar of national and international travellers not only as a place for relaxing beach holiday but also as a place to experience nature, culture and history. This blog post is about Ramba vihara, which is classic evidence to prove the rich historical past of Hambantota.

Ramba vihara lies beside the Walawe basing of Hambantota district. This is a treasure of historical significance and shows us the antiquity of Sri Lanka. A large number of murals and statues can be seen at the image house of Ramba temple, especially the murals narrate the stories that depict the grandeur of Sri Lanka.

How to find Ramba Vihara

Ramba vihara is situated in the Village of Pallerota in Ethbatuwa Wasama of Goiruwa Pattu East in Hambantota, Sri Lanka. It is picturesquely located on the west bank of Walawe river and Mamadala stream (a branch of the Walawe river). The nearest city of the temple is Manavulupura or modern Ambalantota, which is around 13 kilometres from the temple. It had been the capital of medieval capital of Ruhunu kingdom of Sri Lanka.

Find the way to Ramba Vihara

Nonagama is a major point on the Colombo- Kataragama main road after Tangalle and Ranna. One needs to take the Embilipitiya – Nonagama main road with a left turn in Nonagama. Ramba vihara is situated to the left side of the road after about 10 kilometres from Nonagama.

It spreads over a plot of flat land, which is 200 acres in extent.  Excavations started by the Ruhunu Cultural fund are still in progress at the site. The excavations are carried out under the purview of the archaeological department of Sri Lanka.

The excavation project is divided into 6 stages and 3 of them are already completed. What is excavated so far is comprised of the assembly hall, a hermitage for Buddhist monks, and a shrine room.  One of the oldest marble Buddha statues of the island was recovered during the excavation of the shrine room. Today this valuable Buddha statue is housed in the national museum of Colombo.

An inscription, dating back to the 12th century during the reign of King Nissankamalla, who ruled the country from Polonnaruwa was found at the site. Another three inscriptions were discovered at the site but no studies were done so far. Still a huge area of the site yet to be explored. One shrine room that was located near the river was comprised of many Buddha statues. Also, a valuable Buddha statue was recovered from the dwelling area of the temple.

Numbers of large ponds were discovered during the excavations and archaeologists believe that they were used for maintaining the cool atmosphere in the premises. There are four Dagobas with historical importance in the temple, one of them is renovated and is used by the people in the area today.

There is one incident involved with regards to the name (Ramba) of the temple. Samba is the first name of the site and became Ramba centuries after the beginning of the temple. In the incident group of monks from Anuradhapura met another group of monks from Situlpawwa while they were wandering in search of water. The incident took place in the 1st century AD during a severe drought in the island and this was the place where they met or samba (Sinhalese term equal to met).

The temple was originally begun in 3rd century BC during the reign of King Mahanaga. There are many pottery utensils were discovered on the site dating back to this period. Second historical note on the temple was in the 11th century AD, the reign of King Vijayabahu. It had been the royal temple of King Vijayabahu of Polonnaruwa. Once this temple had been the shelter of Queen Ratnawali (mother of King Parakramabahu) and her children for a brief period.

Today it is being visited by a large number of devotees, especially the people who are on the pilgrimage to Kataragama, due to the proximity of this ancient temple to Kataragama temple.