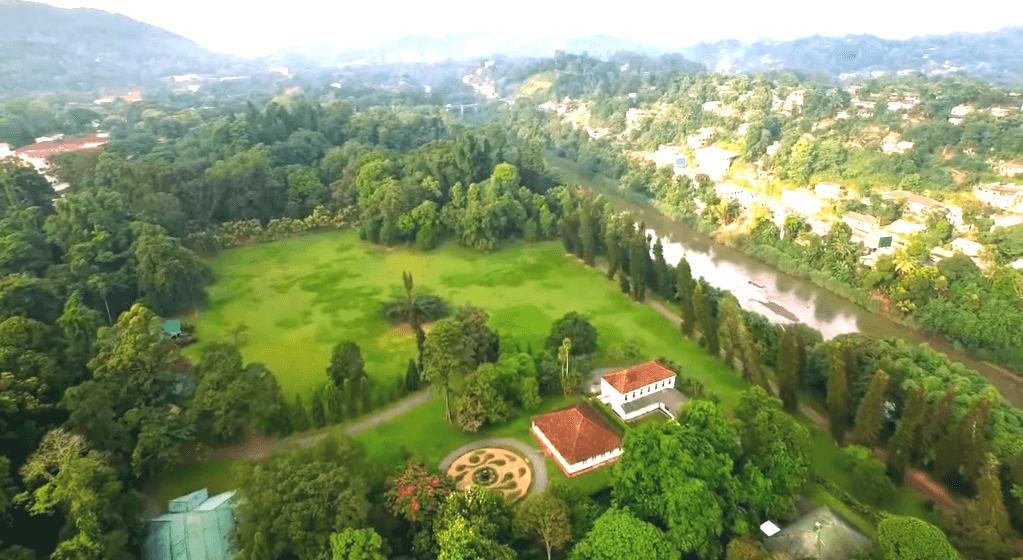 NUMBER OF SPECIES UNDER CULTIVATION AT PERADENIYA BOTANICAL GARDEN KANDY: ABOVE 4000

Kandy is the capital of Sri Lanka’s upcountry. Kandy is full of green and beautiful. It has a fascinating blend of history, cultural, nature and colonial ambience. If you like to know more information on Kandy click here “KANDY SRI LANKA“.

The Botanical garden is an only walking distance away from the Peradeniya railway station and all Colombo bound buses from Kandy and vice versa make a stop in front of the garden. Having easy access to all transportation methods Peradeniya botanical garden is one of the most important tourist attractions as well as the most convenient places to reach in the island.

The entry tickets are available at the entrance of the botanical garden and it cost US$10 Per Person. You also receive a map of the garden at the entrance, which is very helpful to find places of importance within the garden.

HOW TO REACH PERADENIYA BOTANICAL GARDEN FROM KANDY CITY

It is better to hire a TUK TUK to go to the royal botanical garden from Kandy because it is 5 km away from Kandy. Buses are also available to travel to the Botanical garden from Kandy but required about 30 minutes plus waiting time. By TUK TUK it does not take more than 10 minutes to get there. Don’t forget to hire the TUK TUK only for the drive from one place to the other. Once you reach the place you have to let it go and hire another TUK TUK for the return journey. Don’t keep the TUK TUK waiting it cost you a lot.

Peradeniya botanical garden is picturesquely located adjoining the Mahaweli river, which is the longest river of Sri Lanka. The River flows along with the hugging the western border of the beautiful garden.

Peradeniya botanical garden has become the most popular resting place or picnic park in the area mostly for local travellers.  For many tourists, especially for the local tourists, Peradeniya botanical garden is one of the most loved outdoor gathering spots. It gives them the opportunity to learn trees and plants while enjoying the peaceful gathering.

The great lawn is a popular playground among the children. But do not expect to find covered eating pavilions or gas grills here, which are part of a picnic site, after all, it is a green picnic site created within a botanical garden. Therefore no possibilities to prepare food here. The cafeteria near the great lawn provides food and drinks for visitors, but no alcohol served in the cafeteria.

The botanical garden has a Mediterranean climate mainly due to its elevation from the sea. Another reason for its mild climate condition is the nearness of the Mahaweli river.

Even though it is not too warm in Peradeniya like most low-land areas such as Colombo, Bentota, the temperature can hit 25C degrees during the day. Therefore a light cotton dress is the best suitable attire while visiting the park. Taking plenty of fluid is also important while you walk in the park due to sweating.

Taking a binocular and appropriate guidebook related to the trees, plants and birds will be very handy in learning about tree, plants and various local bird species that you come across in the garden.

In 1843 the opening of the Royal Botanical Garden Peradeniya marked with the opening of the South-West portion of the Garden. The south-west part of the garden was cleared, opened and was planted with cinnamon and coffee. Superintendent Moon published his “Catalogue of Ceylon Plants” in 1824 in which was given the Botanical and native names of 1127 plants indigenous to the island.

At initially only 40 acres of the 147 acres were in cultivation and the land was used to grow Jak, Coconut and vegetables for the Government Agent in Kandy. Later on beauty and the usefulness of the garden considerably improved under British management. In the early years garden was mainly directed towards the introduction and acclimatization of useful and ornamental plants but in later years activities developed towards Economic botany and Agriculture.

Palms groove, orchid house, plants nursery, bamboo collection, flowering trees, gymnosperms and great lawn are important specimens in the garden. Peradeniya botanical garden functions as an important repository of tropical plants and trees. It has not only indigenous plants and trees a large number of foreign trees also can be found here.

A temporary residence was erected under the King Rajadhi Rajasinghe from 1780 – 1789. A temple and Dagoba were built during the reign of King Wimala Dharma which was expanded by King Rajadhi Rajasinghe. The vihara and Stupa were destroyed by the English when they occupied Kandy. The famous historical battle of Gannoruwa between Rajasinghe 2 and Portuguese was fought on the northern side of the river.

In 1810 a Garden called Kew garden opened in Slave Island in Colombo. In 1813 the garden was moved to Kalutara for the reception of economic plants which could be cultivated there on a larger scale than was possible at Slave Island. Finally, the garden was moved to the Peradeniya in 1821 as it was found to be favourable and better adapted for the proposed Botanic establishment. The transfer of exotic from the Kalutara Garden was made by Superintends at least up to 1843.

A WALKTHROUGH THE BOTANICAL GARDEN KANDY

You might need to have about 2-3 hours of walking to explore the botanical garden in detail. But if you can’t afford to spend two hours in the park still you can cover most important parts of Peradeniya botanical garden such as palms alley, orchid house, spice corner, bamboo plants, memorial tree collection and great lawn area within 45 minutes.

WHAT ARE THE MOST IMPORTANT OBJECTIVES OF PERADENIYA BOTANICAL GARDEN?

WHA ARE THE 5 MOST IMPORTANT AREAS OF THE BOTANICAL GARDEN?

12 IMPORTANT PLACES TO VISIT IN THE BOTANICAL GARDEN KANDY

Orchid house is the most popular area of Peradeniya botanical garden and your visit to the botanical garden is not complete if you miss it. Orchid house showcases a fine collection of orchid species and some of them are very rare species. Species such as bloom of Cattleya, Dendrobium, Arachnis, Oncidium, Phalaenopsis, Vanda and their hybrids are well worthy of having look. The largest orchid of the world known as Grammatophyllum speciosum as well as many other hardy tropical orchid species can be seen here.

Fernery occupies its space next to the flower garden, which is well maintained with landscaping. paved paths to walk around. A large number of lofty trees draped with rising vines and creepers creates the environment like in a rainforest. There are about 100 species of ferns in the collection.

This is a small man-made lake located toward the left side of the main entrance. There is a collection of a different variety of marsh plants in the lake.

Plant house is located between the orchid house and the administrative office of the Peradeniya botanical garden. If you walk in the botanical garden in the clockwise direction, you will come across the spice garden after plant house. The plant house contains a variety of greenhouse plants such as begonias, Ferns, African violet, Dieffenbachia, Episcia, Philodendron, CalatheaBromelia and Anthurium.

A large collection of Bamboo trees are planted along the Mahaweli river bank, which is the border of the Botanical garden. The largest bamboo species in the world known as giant bamboo (Dendrocalamus giganteus) also can be seen here. This bamboo grows up to 40 meters in height and up to 25 centimetres in diameter. Other species of bamboo available here are yellow building bamboo (Bambusa vulgaris), the feather – left bamboo (Dendrocalamus membranaceus), the prickly bamboo (Bambusa spinosa) and the Dwarf Chinese bamboo.

This is one of the least known parts of the Royal botanical garden among the travellers. The history of memorial tree collection goes back to 1875 with the planting of Bo-tree (ficus religiosa) by the King Edward the 7th on his visit to Sri Lanka. Since then a large number of trees and plants were planted at the memorial tree corner by distinguished personalities from various parts of the world. Today most of these trees standing as big giants in the park.
The last king of tsar royal family of Russia, Prince Nicolas had planted a Na-tree (Mesua nagasarium) here in 1891. In 1901 the king of Jorge of British also planted a sal-tree at Peradeniya botanical garden. The most popular astronaut Yuri Gagarin had planted a flowering plant at the Botanical garden of Peradeniya in 1961 (in the same year he had been to the moon), which is still flowering today after many years.

Another important tree in the memorial tree collection is the cannonball tree (Couroupita guianensis), which was planted by King George V and queen mary in 1901. The tree is well grown and still in very good condition. According to Gadevntures, this is one of the oldest documented trees in the world along with Giant water lilies in Bogor Botanical Gardens in West Java and Wild almond in Kirstenbosch Botanical Gardens in Cape Town, South Africa. The name canon ball tree originated due to its fruits which are big rounded and very similar to cannonballs. The fruits are not edible however they are being used to feed cattle in some areas.

The number of palm species found in the Peradeniya botanical garden exceeds 200 and most of them are grown in various parts of the island. The Double coconut (Laodicea maldivica) is the most remarkable palm species found in Peradeniya, which originated in Seychelles. Double coconut produces the biggest seed in the plant’s kingdom, weighing up to 18kg. Double coconut palms are to be found flanking the main road, which branches off to the left from the main central drive, about 100 meters from the main gate.

Flowering trees are spreading all over the botanical garden and the flowering trees are lavishly decorating the garden in various colours, most of these plants produce the flowers during the flowering season (first half of the year). A row of Pride of Burma (Amherstia nobilis) is to be found near the main entrance of the garden, which produces thousands of bright yellow flowers making a very beautiful scenery.

Today, the botanical garden is responsible for the management and development of Botanic Gardens, National Herbarium, Medicinal plant garden, Gardens attached to the official residencies President, Prime minister, Commonwealth war cemeteries, the sacred Bo-Tree at Anuradhapura and other Historic Trees of Sri Lanka.

Sri Lanka is a tropical island and renders best conditions required by tropical trees and plants to grow. Year-round sunlight and high rainfall that spreads throughout the year feed the trees and plants with much-needed water. The green cover of Sri Lanka is drastically reduced during the last several decades. The forest cover that stood at 49% is reduced to around 23% by 2005, mainly due to the deforestation. Today much of the valuable forest cover is restricted to national parks, reserves, sanctuaries and garden like Peradeniya botanical garden.

One day Kandy tour of seerendipity tours cover Pinnawala elephant orphanage, Peradeniya Botanical garden, tooth relic temple, tea plantations and several other important places… Please get in touch with us if you wish to take the tour.

WHY YOU SHOULD CHOOSE SEERENDIPITY ON YOUR TRIP TO PERADENIYA BOTANICAL GARDEN KANDY?

Seerendipity tour is a fully locally owned travel company with the head office in Colombo. The highly experienced local staff is a key strength of Seerendipity tours and they can plan your dream holiday to Sri Lanka.

When you book a tour with us, you directly book the tour with the local company, it means there are no middlemen and therefore you can guarantee the best price. Simply get in touch with us and let us know when you travel and what you like to see.

Our staff make a personalized program for you, which you can change until you find the best package for you. You can also browse our existing tour packages for inspiration; all our ready-made tour packages are customizable and can be tailored to meet all your expectations. Write us on admin@seerendipitytours.com

Some other informative web pages on botanical garden Kandy