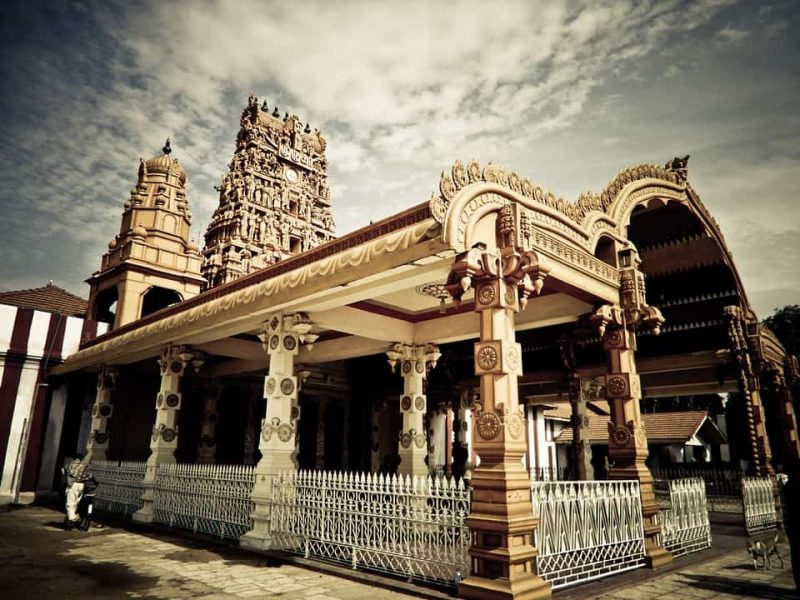 You will find Buddhist temple, Hindu temples, Catholic churches and mosque rubbing their shoulder each other, in every major city. Visiting Kandy, which is the cultural hub of Buddhists on the island, where tooth relic temple resides, is a classic example of this religious harmony.

The tooth relic temple, the most sacred Buddhist temple on the island, which is also the most important tourist site in Kandy, is surrounded by the catholic church, a mosque and a few Hindu temples.

Even though, you visit a Buddhist temple on your Sri Lanka holiday, chances of visiting a Hindu temple is highly unlikely, unless your travel to the east coast of northern Sri Lanka. Especially in the hill country, south coast and west coast of Sri Lanka you don’t see many Hindu religious sites. However, if you are on a Ramayana tour, your guide will escort you to a few Hindu temples that are closely related to Ramayana such as Seetha Amman temple.

Visiting Buddhist temple: what you need to know

All visitors to these sacred places suppose to dress in a particular manner to uphold its religious value. There is a set of rules that every visitor of religious site observe while visiting sacred places in Sri Lanka. If you are wondering what these rules are? Check this article “13 RULES TO OBSERVE WHILE VISITING SRI LANKA BUDDHIST TEMPLE, SRI LANKA TEMPLE DRESS CODE AND TEMPLE OF THE TOOTH DRESS CODE“.

In this blog post, we are concentrating on Nagulaswaram temple, which is a Hindu temple. It has some historical value and religious importance. However, it can be described as an off the beaten part tourist site in Sri Lanka, because it is not in the radar of most travellers.

Naguleswaran Hindu shrine, which is located in the northernmost city of Sri Lanka believed to date back to more than twenty centuries. Even though there had been some difficult time for the shrine during the Portuguese rule in the island, in which the temple was completely destroyed.

Sacred elements of the shrine were hidden by the fleeing priests at the time of destruction. Some of the valuable possessions of the temple were hidden in the seabed. Local people were also helped the priests to protect the valuable from the invading Portuguese army.

The revival of the Naguleswaram Hindu Temple Sri Lanka

Temple was rebuilt on the same location in the 19th century and today it is one of the most popular pilgrimage sites in northern Sri Lanka. Today most sacred elements are recovered, from where they were hidden and placed in their proper places within the temple. Historical evidence such as chronicles and inscriptions have helped the archaeologists to determine the exact story of the temple in the past.

Naguleswaram Hindu temple was dedicated to God Shiva and located in the popular seaport of Dambakola. Tiruketheeswaram and Tirukoneswaram being other popular Hindu temples in the nearby places are also dedicated to God Shiva and they are located in other popular seaports in the northern Sri Lanka Mantai and Trincomalee respectively. It is said that the merchant from all the parts of the world gather to these temples and offered some offering with various other poojas to get the blessings of God.

The inscription that found in the first capital of Sri Lanka (Anuradhapura) dating back to 2nd Century BC, suggest that Navika Damila (Tamil traders) were having a dominant position on the trading in the island were the custodian of these three shrines. It had been a major pilgrimage site even that time and it is a valuable place with great antiquity, tradition, history and reputation.

Being located in the main trade route of the world between Rome and China (main trade partners in that time), a large number of traders used to call over at Sri Lankan ports to get their essential items to need for the journey. Gradually started trading activities in the ports of the island saved the time and curtailed the journey of traders from East and West and later Sri Lanka became the hub of the ancient trade in the Indian Ocean.

The Naguleswaram Temple is considered as one of the oldest Shiva temples on the island. The temple was built close to the ancient port of Jambukola Pattuna or Dambakola Patuna (present Kankasanthurai). Other than the economic significance the port had been a major important place in the sense of religion.

Arahat Mahinda, who introduced Buddhism to the island landed in the port of Dabmakola in 250 BC and the Theri (female monk) Sanghamitta who brought the sapling of Bo-tree also believed to be landed in the same port. The temple has a Keerimala, a natural spring with curative value. The temple is built around a cave which believed to be inhabited by the legendary figure of Nagulamuni and natural spring.