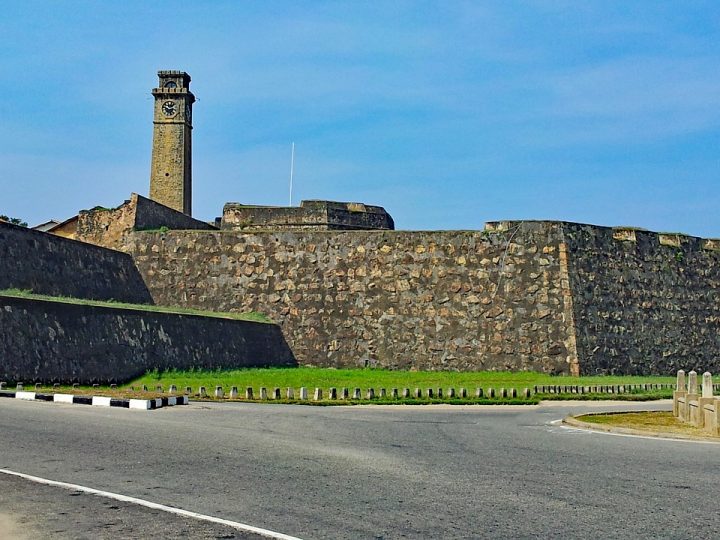 According to James Emerson Tennent, Galle was the ancient seaport of Tarshish, from which King Solomon drew ivory, peacocks and other valuables. Cinnamon was exported from Sri Lanka as early as 1400 BC and the root of the word itself is Hebrew, so Galle may have been a main seaport for the spices.

Galle Sri Lanka is one of the fascinating cities and it has a vibrant history dating back to the pre-Christian era. It offers a wealth of history, nature, culture best of all pristine palm-fringed beaches! Galle Sri Lanka is popular for warm, friendly and hospitable people. From amazing rainforests and marine reserves to colonial palaces with Dutch colonial heritage, Galle Sri Lanka offers a large number of tourist attractions to suit every traveller and every budget. Galle being a major city in southern Sri Lanka offers plenty of opportunities for shoppers too.

Galle Fort is an archaeological masterpiece, and archaeologists highly adorn the unique architecture of the Fort. The “horseshoe” shaped windows and steep roofs with big verandah like the one you will see at Wolvendaal church of Galle are one of the architectural highlights of the region. Also worth noting are the ornate facades, amazing masks, delicate figures and intricate designs that adorn many of the buildings.

The Dutch Fort is the most important tourist attraction in Galle Sri Lanka. The cobblestones pathways are lined with whitewashes Dutch styles shops, houses, museum, galleries and boutique hotels. A few places on earth can match the beautiful settings of this colonial walled city. But this UNESCO world heritage site is about much more than colonial charm and Dutch architecture.

Galle Fort as a holiday destination

The historical importance of the Fort

The Fort is the most historical part of the city, which is a part of every Galle day tour, the fort is located towards the picturesque, western flank of Sri Lankan southern province, surrounded by the sea from three sides and opening to the mainland from one side, the mediaeval fortress of Galle rises more than a dozen of meters from the sandy beaches like a golden castle. Built beginning 1505, the land filled citadel stands guard atop of the highest spot between the Galle city and the beach.

Where is Galle Fort?

Galle is a beautiful city in the southern Sri Lanka which is 118 KM south from the Commercial capital (Colombo) of the island. Galle is been considered as an important historical city and which is declared as a UNESCO world heritage site, owing to the presence of Galle Fort. This historical city is located bordering the beautiful beaches of southern Sri Lanka. Therefore Galle is popular not only among the local travellers but also among the foreigners and Galle tour is an important tour to most travellers. Today, Galle can be described as the single most important tourist attractions and part of almost every Sri Lanka tour itinerary.

Galle has been a popular trade emporium in the Orient since the dawn of the commerce. Galle is not only significant for the Sri Lankan commerce but also for the history of Sri Lanka. According to the old-testament, Galle harbour was the port (Tarshish), where King Solomon drew valuables such as gems. Other than the historical reasons and economical background Dutch fort is the most important single factor, which made the city a UNESCO world heritage site. Dutch fort is dating back to the 15’s and showcases typical Old Dutch architecture and urban planning.

Galle Fort is the best preserved Dutch fort in the whole South Asian region. The high-rise wall of the fort demarcates the older part of the Galle city. The fort is built on a headland of which three sides are surrounded by the Indian Ocean. The rampart of the Galle Fort is measured to be more than 2.5 km long and attracts thousands of foreigners as well as local people. People are using the rampart for evening walks while enjoying the nice view and soothing breeze of the Indian Ocean.

The beginning of Galle Fort

The beginning of fort is attributed to the Portuguese arrival in 1505. A fleet of Portuguese fleet led by Lorenzo De Almeida, which was heading to the Maldives, was blown off by heavy wind and accidentally landed in Galle. Later in 1587, the thriving trading port of Galle was forcefully taken over by Portuguese and restricted the access of the Kandyan kings to the maritime region.

Galle Fort during the Dutch rule

After the arrival of the Dutch colonial rulers, the fort was expanded to the present size. A large number of constructions was added to the city with a sophisticated underground sewer drainage system. Most of the old constructions are still in good condition and being used for the last several centuries.

Even though the Galle fort was occupied by English in the 1800s, it was Dutch, who made the strongest impact on Galle town, Galle Fort, harbour and people of the area. The town and Fort still retain the Old Dutch characteristics, Dutch architecture, names, the streets are almost not changed since they first constructed. The Leyn Baan Street (Lijnbaan meaning rope walk in Dutch), Lighthouse street (Zeeburg Street), and Great and Small Modarabaay Streets (Modderbaai) are some of the popular names of the Streets of the fort.

Dutch Fort was taken over by British

What to see in Galle Fort

The Ramparts, National Museum of Galle and the National Maritime Museum, All Saint’s Church, the Dutch Reformed Church, Galle Natural Harbour, Old Lighthouse, the English Gate built by the British in 1873, the Dutch gate where British Court of Arms is seen carved on the outer side and the VOC monogram on the inside of the stonework, the Dutch prison, Dutch houses, the Dutch factory and hospital that have now been converted into government office.

According to the historical evidence; the history of the city goes back to the Pre-Christian era. The first historical event of the city is related to Ramayana. The greater part of Sri Lanka is said in the Ramayana to have been submerged in the sea, and the Great Bases Lighthouse, which stands out on a solitary rock in the south-east sea of the island, is still called Ravana’s fort.

Rumassala forest, which is located southern border of the city, came to be as a result of the Rama-Rawana war. When Laxmana wounded in the war against Rawana, Rama had ordered Hanuman (Monkey God) to fetch some medicine from Himalaya. As Hanuman forgot the names of the herbs, he snatched a part of Himalaya and flew back to the island. Today Rumassala is considered to be a piece of the mountain that he fetched from India.

Ancient seaport Tarshish, is it the Galle harbour?

According to James Emerson Tennent, Galle was the ancient seaport of Tarshish, from which King Solomon drew ivory, peacocks and other valuables. Cinnamon was exported from Sri Lanka as early as 1400 BC and the root of the word itself is Hebrew, so Galle may have been a main seaport for the spices. It had been an important trading port in the east, where a lot of merchants flocked in to exchange goods. Galle harbour had been an important foreign exchange earner for the country in the early days in the form of tax. It is said kings were levied huge taxes on the merchant ships, which harboured in Galle.

The landing of Lorenzo De Almeida in Galle

When the Portuguese merchant ship led by Lorenzo de Almeida landed accidentally in 1505, they were amazed to see the thriving port and the trading activities in the city. The Galle name derived from the Portuguese word Gallus, as the story conveys, Portuguese ship was caught in a storm and drifting in the ocean before they landed in southern Sri Lanka. As the ship was nearing the land they heard a Cock from the land and one shouted “Gallus Gallus”, later on, the word Gallus became Galle as it is called today.

Galle Dutch Fort UNESCO world heritage site is the best-preserved fortified city built by European colonial powers in Asia. As the Portuguese controlled the maritime region of the island they took the initiative of the Galle Fort.

Initially, it had been small fortification and occupied by a small number of soldiers. As the Dutch rulers took over the control of the maritime region they expanded the Galle fort making it the biggest fort in the country. They converted the fort into a well-formed city with all the facilities. Still, most of the buildings are in the typical Dutch architecture, while the names of streets, houses and other building in the typical Dutch language. Under the British rule, no remarkable changes were done for the fort.

Galle as a major tourist attraction in Southern Sri Lanka

Today it is one of the major attractions in southern Sri Lanka with a lot of cultural and historical value. Dutch fort houses many churches, temples, as well as other religious buildings. One encounters a lot of souvenir shops, textile shops, jewellery shops, museums and street vendors in the fort. It can be busy in the fort particularly in the evening and weekend while locals are coming to enjoy the nice, calm, peaceful environment with the old charm.

Falle fort under the supervision of the archeological department and the Galle municipal council. It is one of the highly residential areas in Galle. However, it attracts many thousands of tourist every day due to its historical importance and architectural importance. Despite its popularity and importance none of the visitors required to spend money on Galle Fort entrance fee. None of the visitors is a charge for entering Galle fort and most of the important tourist attractions located in the Fort are also free of charge. However, there are only a few tourist attractions in the Fort such as Galle maritime museum where you required to purchase entrance ticket.

There is a labyrinthine cobbled street in the Fort and they are lined up with hundreds of thousands of Dutch-built buildings. Some of the buildings are more than 200 years old and still in very good shape. Some of the buildings are converted to museums, libraries, shops and hotels allowing the guests to spend some time on buy8ng various artefacts, souvenir, clothes, gems and jewellery as well as sampling delicious Sri Lankan food.