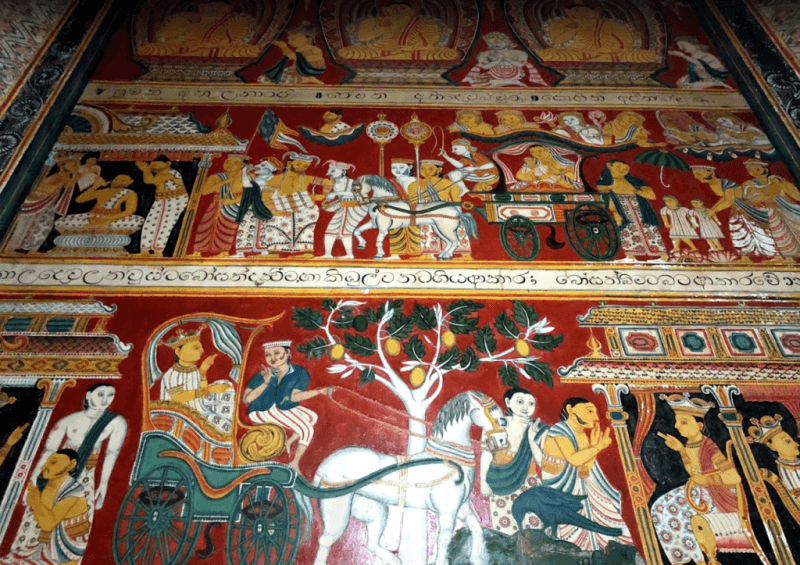 It is a range of hills situated 20 km south-east of the ancient city of Polonnaruwa and it is 220 km from Colombo. The historical and religious importance of Dimbulagala temple is very high. However, it is not frequently visited by travellers, mainly due to its remoteness. I feel it had been little bit closer to Colombo and it could be visited on a day trip from Colombo, the temple could have attracted a large number of visitors.

Dimbulagala rock is picturesquely located bordering the Mahaweli River. Dimbulagala rock rises within the jungle near the Batticaloa-Valachchane main road. It can also be easily reached by the road of Mahiyangana.

The natural wealth of Dimbulagala temple

Dimbulagala rock is surrounded by Jungles, farmlands, rice fields, and Dumabara mountain range from one side. One can have beautiful bird’s eye view over the surrounding area from the summit of the rock, after the long and little bit tiring climb. The huts installed along the way up to the summit can be very handy to have a rest and have a refreshing drink such as juice, tea or coffee.

Dimbulagala considered being one of the important places for Buddhist in Sri Lanka. It is one of the most visited pilgrimage sites in the dry zone of Sri Lanka. Since it is located in the former war-torn area, it had been unsafe for people in the past and rarely visited by the people. Today after the 30 years wars, people from all around the country are pouring into the historical temple of Dimbulagala. People make donations of money and goods to rebuild the dilapidated temple premises.

The history of the temple is going back to the 3rd century BC. The historical name of Dimbulaga is Yakshapura and inhabited by tribal groups known as Yaksha and Naga. It had been the meeting place of these groups. Another ancient name of the rock is the Udiumbagiri.

The temple was resided by Kashyapa Thera, during the reign of Greta Parakramabahu. The temple was frequented by the King while he was instructed by the monks with the state affairs. The king had donated a huge area of land for the temple. It is believed that if somebody uses this land illegally or by force, they will be born as crows and dogs.

Dimbulaga can be compared to cave hermitages such as Mihintale, Vessagiri, Dambulla and Pidurangala. Dimbulaga had been a popular training monastery for Buddhist in the early stage of Buddhism in Sri Lanka.

The monks from foreign countries such as Siayam, Kambodia, Soli country, Burma and Pandy country were also among the monks learned here. There are ruins of the historical temple in Dimbulagala. There had been more than two thousand monks in the ancient learning centre. There are two ponds among the ruins namely Namal Pokuna and Ausada Pokuna used by the monks. There is a large number of ruins in the temple dating from 300BC to 1200AD. The Brahmi inscription of caves proves the antiquity of this temple.

Near the summit of the rock is a series of caves with white plated walls known as Maravidiya. According to the historical information, large numbers of books, documents were written here by learned monks that lived here.

Well, known monk, Matara Kithalagama Siri Seelalankara Threra (Lion of Dimbulagala) is the key figure, who had started the present temple in Dimbulagala in 1954. At the initial stages, it was inhabited by wild animals such as elephants, leopards, bears and the people of Vedda community.

This brave monk was working very hard to improve the living standard of the people in this remote village while facing a permanent threat from the Terrorists. It had been a very difficult task to improve the literacy of the people in the remote area. But thanks to the untiring effort of the monk, a new school was built and other infrastructures such as roads, sanitary facilities, clean water, hospitals were also improved with the help of villagers.

The development of the area was widened up to the areas such as Ampara, Batticaloa and Trincomalee. Even though he was a Buddhist monk, he did not favour the Buddhist; he did not consider religion or race. He helped all people in order to protect their rights and improve their living standards. Unfortunately, this monk was killed by the terrorists. Today the temple is resided by 300 monks and Monk Maldeniye Jenalankara Thera continues the good works started by his predecessor.